With schools set to close, it can be tricky to find things to do with small children if you can’t go out.

This list obviously isn’t exhaustive, but I hope it can help stave off boredom for a little while at least…

Craft Activities
The classic rainy-day craft is the old ‘cardboard box and a huge pile of pens’, but what happens when you’ve done that? How about giving French Knitting a go?

You don’t need any fancy equiptment, though a crochet hook does make things a little easier. All you need is a toilet roll tube, some craft sticks/paperclips/hairslides(bobby pins), and some yarn.

This is a great tutorial on how to make the … loom? And how to actually do the knitting. 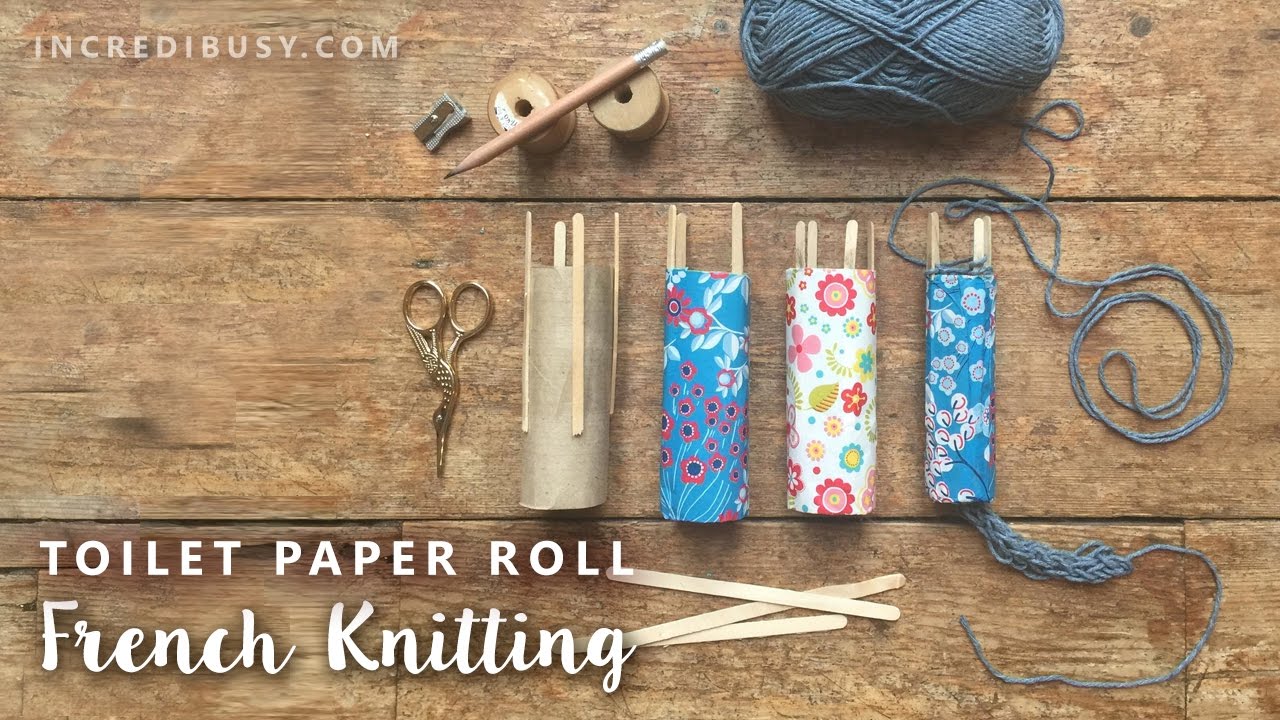 Finger knitting is another great craft to try – I love the idea of making a hat using this technique!

There are thousands upon thousands of origami tutorials on YouTube, too. Once you’ve made your animals, vehicles, and boxes, you could have a go at building a theatre for them – either hang them on strings to attach to more craft sticks/chop sticks/actual sticks and perform plays.

Why not make a Marvellous Hat like Millie’s? Folk a paper hat and add the things you’d like to see – either by drawing them on, or by cutting and sticking images from catalogues or old magazines. Or how about making your very own Elmer the Elephant from an outline and some paper squares?

And there are SO MANY book related activities on Pinterest – so many other crafts too! If the above don’t appeal, just type in whatever materials you have to hand and the words ‘easy child friendly craft’. You never know what new skills you could learn! 🙂

Check out your local library

I know, I know, you’re self-isolating, but actually, most libraries have extensive online catalogues. This doesn’t just include e-books, either. Many libraries offer audio books digitally too. Our own local library’s catalogue is here, by way of example.

Why not dig out an old jigsaw, pop on an audio book and spend the afternoon in companiable quiet.

If you don’t have access to your library digitally, YouTube is your friend here once again – search your favourite author+audio book and see where it takes you. Here’s Chapter One of Neil Gaiman’s The Graveyard Book to get you started…

Even if you don’t have any outdoor space, or seeds bought specially for the garden, you can still have a lot of fun nurturing a tiny plant. Using coffee grounds as soil if you’ve not got any compost to hand (or spent tea leafs/contents of a tea bag), or moist kitchen/toilet roll (if you have any!)… Basically, you can start from all sorts of things. Dried peas/beans tend to sprout really well – I’ve heard popcorn kernels do too but I’ve never tried them myself. You could also use corriander seeds, sunflower seeds, avocado pips and apple seeds. This is a great time of year to get planting and this activity can tie in to all sorts of books and topics. Right the way from Plant the Tiny seed, through Ruby Nettleship, to The Year at Maple Hill Farm and Rosy’s Garden, this can tie in with all sorts of stories.

Got/can-beg any wine corks? Toothpicks? Scrap paper? Why not have a go at making sailing boats? Spend an afternoon racing these, or exploring the different variations of these you could make. Do paper boats, or cork boats float better – for example? Which boat goes the fastest? Do different shapes of sails make a difference? You could try other bases for your boats – such as jam jar lids. The world really is your oyster with this one and with SO VERY MANY books about pirates in the world, you can tie this activity in with pretty much anything.

Whilst it might not seem like it to begin with, baking is a great science activity. Try making a simple sponge cake, then talk about what makes it rise. If you’ve got bicarb and vinegar to spare, this could be a perfect change to talk about acids and alkalis. As ever, if you don’t have these ingredients in, check out YouTube for some kitchen science.

Make your Own Story Dice

You don’t need to buy expensive story dice to have fun with them. Why not make your own from things you have around the house?

You can either do the following, as I mentioned in an earlier post:

Or you could find some old building blocks and a sharpie, and draw an image on each side. Or if you’re not a confident artist, why not try cutting images from magazines and sticking them to some rocks from the garden, then covering with PVA? You don’t even need to stick them to rocks – just cut out your images, toss them into a hat (or other convenient vessel!) and pull them out one at a time.

Inspired by Herve Tullet’s Play of Light, why not have a go at making your own shadow theatre? In short, grab a box, cut some holes in it, and cover the biggest hole with a sheet of white paper. The bonus of this is that the puppets can change as often as you like, and take time to make! This is a wonderful tutorial.

Have a Treasure Hunt

Go on a virtual ‘world tour’

Using books like Lots and Maps as a starting point, why not select a country to learn about? If you’ve got access to the ingredients, you could have a go at making some food from your ‘destination’, sketch some of the landmarks you see (following your online search!), and plan routes around the capital city (if you’re a map nerd like me). Why not have a look at the language via apps like Duolingo – see if you can hold a conversation after a few days of practise!

If there really are no real countries you fancy visiting, why not invent your own? Imagine its climate, what the buildings are like, what the national costume might be? Can you invent a national anthem, or a flag? Can you draw a map? These are all great starting points to fire a child’s imagination.

Check out some of the Story Sacks I made

If you’ve got a copy of Lily Brown’s Paintings, or Ruby Nettleship, then I’ve uploaded some free PDF activity sheets in earlier posts. Whilst you might not have everything these ask for, they were specifically designed so that most people would have most of the necessary bits and bobs, so hopefully you’ll find something there to amuse small people.

At the moment, the lack of loo roll and pasta just feels like a huge inconvenience, but we’re actually making history right now. In the aftermath of many historic events, diaries of the very young can be few and far between. In this digital age, though, that doesn’t have to be the case.

Even if your small person isn’t much of a writer, you can keep a digital diary, using a smart phone or webcam. Ask them how they’re feeling, what they’re enjoying about being off school and what’s frustrating. Ask them what they think the future will look like, and what they hope will happen. Ask what they’d like to be when they grow up, and if seeing this outbreak has changed or impacted that.

Cosmic Kids Yoga is an integral part of many a nursery/childminder setting I’ve been to. Fun in its own right, it might also help to ease the transition into spending more time at home – something familiar from an established routine. I know it’ll help in our house.

If you have a few more wiggles to shake out, how about a dance party? Put on some songs you can dance to and have a boogie in the living room. If grown ups join in, they get a million points!

For younger children, there are a lot of action rhymes available at the Scottish Book Trust website, under the Bookbug heading.

In addition to songs you want to move to, there are some great classical music pieces for children. A personal favourite is The Young Person’s Guide to the Orchestra, by Britten. It’s available for streaming from many online, but I actually really like the narration on this one that’s on YouTube – it’s clear and simple without being patronising.

Another great example of music for children is Peter and the Wolf by Prokofieff. Again, you can get this on many music streaming services but YouTube also has a huge selection. I like this one – it names all the instruments at the beginning so they’re easy to identify. If you want visuals, you can find animations which match up.

And as with the others, Carnival of the Animals by Saint-Saens is available for streaming and on YouTube. Someone was telling me that The Wiggles did a version (one of those YouTube) but there are many others too, so I think it’s a case of picking the right tone for your audience. Johnny Morris’s attempt has little poems about the various animals at the start of each piece, but these haven’t aged especially well so might not play as intended to a young audience. The Kangaroo section makes reference to Foster’s Beer and cricket, for example, whilst my rather sensitive son got upset at the eating of a ‘chicken’s child’ – i.e. an egg.

Another piece of music that I always think is a briliant one for children is The Planets Suite by Holst. I remember listening to them all at school – Mars, Venus, Mercury, Jupiter, Saturn, Uranus, and Neptune – then being asked to compose a movement for Pluto (which was, at the time, still a planet). I think this is a really fun activity for children, and they don’t need to have any prior musical knowledge – craft some shakers from a jar filled with rice, make some drums, use a margarine tub with elestic bands to twang, and the human voice.

Other great music includes In the Hall of the Mountain King by Grieg, and Vivaldi’s The Four Seasons. If you’re not tired out from all the yoga earlier, you could try moving to the music in a way that feels appropriate – big stomping steps, or little light feet. You could try and write a story to go along with these pieces, or act out a play imspired by them using your shadow theatre (see above).

I think it’s worth noting here; A lot of people feel like classical music is stuffy, won’t appeal to children, and is thoroughly outdated. Nothing could be further from the truth. If you have a reluctant listener on your hands to begin with, check out TwoSetViolin’s ‘Violin Charades’ videos. The Marvel and Disney ones are a great starting point. If you have a gamer on your hands, Taylor Davis and Lara De Witt play the Pokemon cartoon theme on violin and piano beautifully. I listen to it for pleasure. I’m not even ashamed. Canadian Brass are another great thing to watch for a musical giggle – I saw them live in Germany and it was such an incredible show!

I hope this has given you some ideas. I’ll try and update you with some of our adventures and reading over the next few weeks. I would love it if you could update me with yours!

4 Replies to “Stuck at home? Nothing to do? Try these fun, cheap activities…”