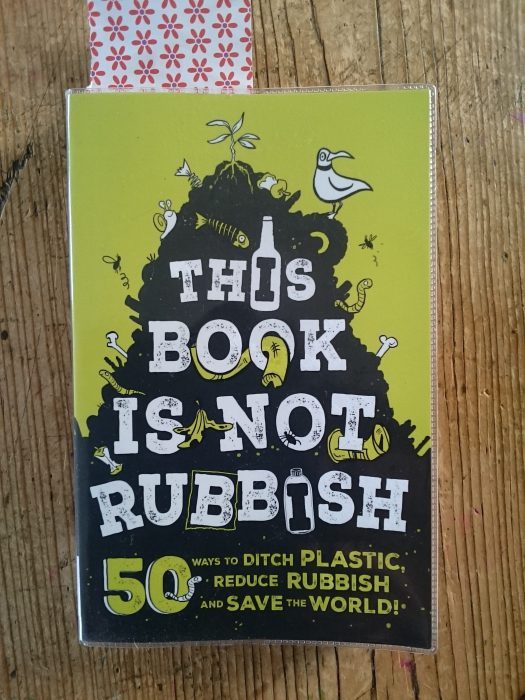 After Daughter’s enthusiasm for Kids Fight Plastic by Martin Dorey, we thought we would have a look at This Book is Not Rubbish by Isabel Thomas.

Very similar to the previous title, this book details child-friendly ways to reduce our impact on the environment. 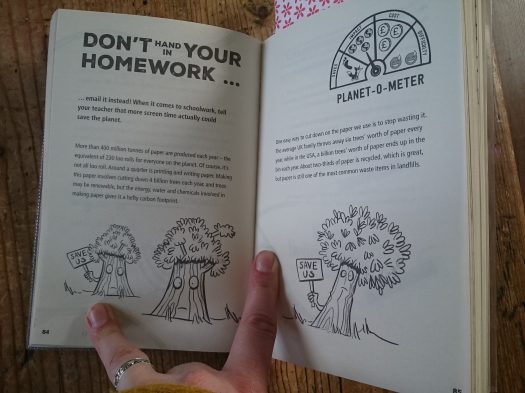 Firstly, as an adult reading this (and especially as an adult being expected to miraculously implement everything right now) I would have liked a link to the science that backs the claims of this book. I kept trying to find sources for the facts and figures stated, but kept coming up blank. I felt that some of the points contradicted what’s often accepted as common environmental wisdom but that’s possibly because I haven’t read enough recent literature on the subject.

That aside – again, as an adult – I felt that the illustrations and jokes were trying a little too hard to appeal to children. Daughter actually got fairly upset at the thought of sentient trees (pictured above) and would have just preferred a wholly factual approach as in the previous book. That said, we are a fairly atypical family in many respects, so perhaps this approach would work for those who found Kids Fight Plastic too blunt.

Regardless of these comments, I would definitely recommend this title for any small ecologists. The almost bullet-point nature makes it accessible to reluctant readers, or makes it a really quick read for those who are more confident. It’s also nice to have something to dip in and out of – ideal to read during short journeys, or to keep on a living room table for a quick ‘grab’ from bored little fingers.

We’ve got one earth-friendly book to review fromm our reading so far. Are there any similar books you would recommend? 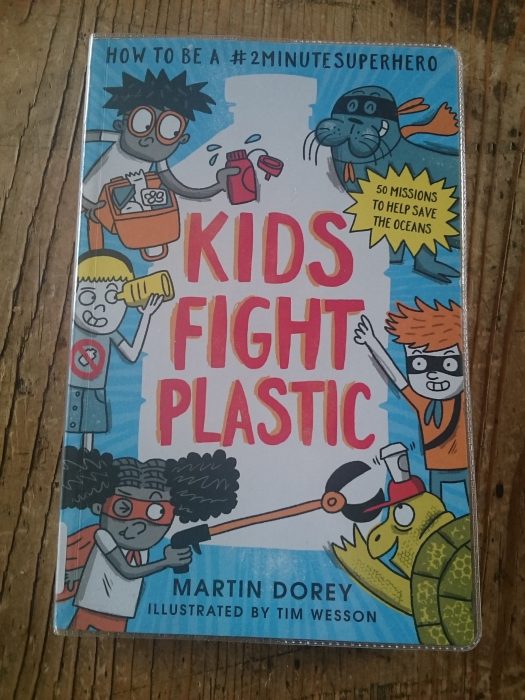 I have seldom seen Daughter as excited by a book as she was when we found Kids Fight Plastic by Martin Dorey at our library. Which is saying something – she gets really excited by books.

Just before the summer holidays started, she took part in a litter-pick and since then has been on a one-child mission to eliminate plastic waste from our home. Now, fully armed with a handbook on how to do that, she’s become a force to be reckoned with. 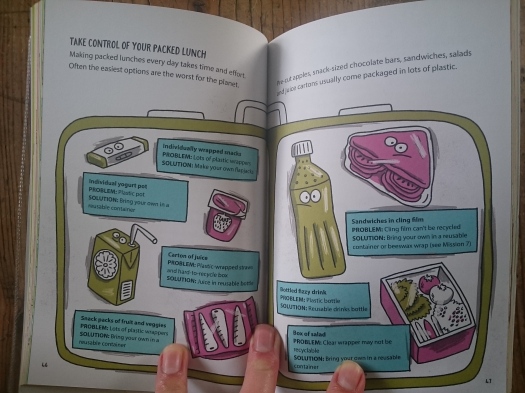 So, having had this book flashed at me more times than I care to admit to, I thought I would take a closer look.

For the most part, I really like the tone of the book. It’s not anti-all-plastic – there is mention at the beginning of good vs bad (i.e. Lego & medical equiptment = good plastic, single-use straws & clingfilm = bad plastic). I also really like that nothing is dumbed down because it’s written for children. It states in black and white that sea birds are dying because of what we’re throwing away, and whilst that’s a grim fact, it’s not going to change unless we talk about it and let our children make informed choices for themselves.

On the other hand… titles of segments such as ‘Fight Plastic With Pester Power’ made me feel as though the book was targeted at a very… specific demographic. Suggestions of ditching the supermarket in favour of farmers’ markets are well meant, for example, but they’re just not within everyone’s means – whether as a result of financial restraints or the fact that there just aren’t any farmers’ markets in your area.

But that aside – the illustrations are lovely and as I said, the text isn’t in the least bit patronising. And whilst living where we do, there’s no way I could use a milk-man, or visit a weekly farmers’ market (they only run monthly and ours tends to sell hobby crafts rather than produce), I did get some ideas as to how I can further reduce our household waste, particularly in regards to things like stationery.

I think, coupled with a healthy dose of managed expectations, this is a great book to get small people thinking about, and talking about, the waste we’re creating. Hopefully doing so will help them to make wise decisions further down the line.

What are your favourite books about the environment?

M is for Autism is a book by The Students of Limpsfield Grange School & Vicky Martin.

I definitely think that this is essential reading – not just for children/young teens, but also for their parents. The searing truth with which its written makes it one of the clearest, most concise insights into what life is like as an autistic person that I have read.

There were two sections which really stood out for me as being especially piercingly honest.

The first is from M’s perspective and concerns her feelings following her diagnosis;

It’s like I can be shelved correctly or put in the right section. I mean, do people even know what being autistic is? The truth is they don’t really know me. I wonder if they really knew me they might get scared, so it’s easy for them to say ‘she’s autistic’ and label me but the truth is they have no idea of the shape, texture and size of my world.

The next is from M’s mother’s point of view;

So here I am, chopping onions and trying to bond with my beautiful daughter but it’s not easy. It should be, shouldn’t it? But reaching her and connecting with her feels so hopeless, so futile, but today I am making a big effort. I am her mother and I cannot give up on her or let her down.

The prose is this vital, this direct, throughout the book. So, although it’s a very slim volume which reads really naturally, it actually took me a long time to digest the words properly – I took my time over it, which I think everyone who reads it needs to do.

The artwork is also really honest – bright, block colours and really graphic prints. The art can be quirky and fun whilst simultaneously thought-provoking, generally just suiting the age and feel of the protagonist perfectly. 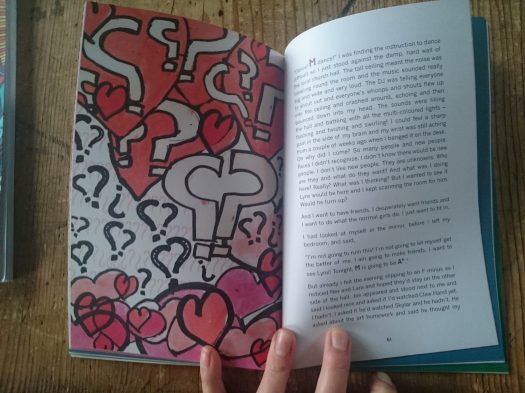 I feel as though this is one of those books which every home needs – whether autism impacts you directly or not. If everyone read this, there might be a greater degree of understanding and awareness in the world.

Have you read M is for Autism, or another book with a female autistic character?

The Usborne Write Your Own Story Book was recently gifted to Daughter and not only am I seriously impressed by its contents,  I’m also a little jealous that I didn’t have a copy growing up.

I think what I like best about this book is how it manages to convey important elements of writing in a way that is simultaneously child-friendly and technical. It also manages to offer a range of activities for budding authors to practice on,  without making them feel like work-sheets.

 There’s a wonderful sense of fun to all of the suggestions – a cheekiness that Daughter just loves. I really like the fact that the reader is encouraged to write in the book, meaning that there’s a record of work to look back on at the end – it essentially becomes a DIY short story compilation. As someone who wrote prolifically as a child but who has few remaining examples,  I feel as though this will grow into a lovely keepsake.

Which childhood hobbies have you maintained?  Are there any books out there to encourage more young people to engage in them? 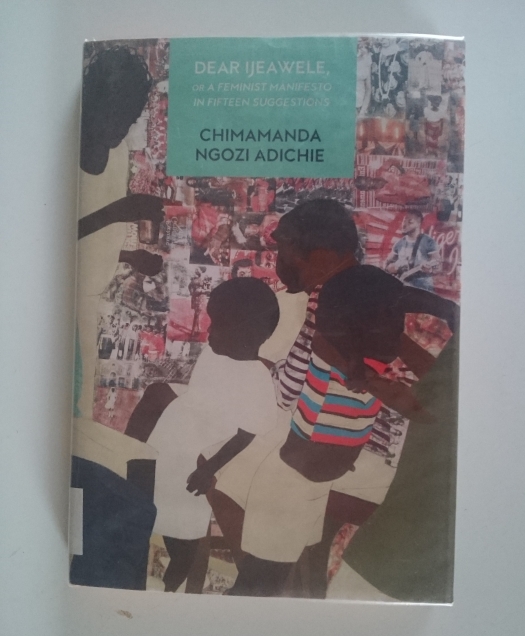 Dear Ijeawele by Chimamanda Ngozi Adichie is a book that I wish I’d had in my life a long time ago.

Whilst not technically a children’s book, I decided to include this on The Inquisitive Newt for two reasons.

Firstly, because I wish I had read this during my teenage years, when I was stumbling into my initial romantic relationships. I feel that having reasonable expectations, printed in black and white, would have given me permission to advocate for myself and my rights within the ‘partnerships’ more.  I plan to give a copy to Daughter when puberty takes hold.

Secondly,  I included it because I would have loved to read it after having given birth.  I came to a lot of the conclusions myself, but I often felt alone in my convictions regarding feminism and motherhood.  Ironically,  given that I’ve categorised this review as my first ‘parenting’ title,  I especially loved the section regarding the use of ‘parenting’ as a verb.

I really love the tone of the text – that it was adapted from a letter gives it an enormous warmth and immediacy. I’ve read a lot of books about feminism but they can often feel… Academic,  rather than practical.  This one felt like a conversation with a friend, which I suppose it is.

Are there any books you wish you had come across sooner? Are there any you plan to read/gift to your children for this reason?