This is another one of our charity shop finds. And I know I say this about almost all of the books I discuss here, but this one really is one of my favourites.

Perhaps best known for The Eagle of the Ninth, Rosemary Sutcliff has also written a number of books about the Arthurian legends, and I feel as though The Minstrel and The Dragon Pup very much draws inspiration from these. That’s not to say that this is a stereotypical medieval fantasy story – there are no swords, or sorcery. At its core, the tale is about a singing musician who finds a dragon’s egg, hatches it, raises it, and loves the resulting dragon.

And it’s that love which makes this such a rare tale.

I’ve read a lot of fantasy over the course of my life, and I’ve found that if the gender roles of knights and damsels are challenged – and this is rarer than you’d think – that it’s done by placing women in a traditionally masculine role i.e. the Knight Alanna in Tamora Pierce’s The Song Of The Lioness Quartet.

Don’t misunderstand me – that’s brilliant too. But this is honestly the only instance I can think of – off the top of my head, in any case – in which there’s a boy in a caring role, who undertakes a quest for non-romantic love.

The plot follows The Minstrel – a young man who sings for his supper as he tours the kingdom. One day, he finds a dragon egg, just as it’s about to hatch. He cares for the dragon pup – who he names Lucky – and the two form a loving, gentle friendship. One night, though, Lucky is stolen. The Minstrel goes searching for him but to no avail. His songs become sadder and he grows hungrier. Time passes, until a chance encounter leads him to Lucky – a prisoner now in the king’s menagerie. The Minstrel then uses his skills as a song-writer, and the love he feels for his friend, to solve the king’s dilemma and win the freedom of the dragon pup.

Aside from the obvious ‘quest for the love of a friend’, this book is also unique in that the happy ending doesn’t involve vanquishing a foe – neither with violence nor with trickery. It involves healing with music. There are no villains in the work – the thief who steals Lucky is only trying to survive in a harsh world and the Minstrel doesn’t seek vengeance.

Yes, the questing hero is still male, but it feels different to the usual ‘hero saves damsel’ tale on account of the love which drives the search being parental, fraternal, and philial. It’s more Finding Nemo/Finding Dory than any usual fantasy. It deals with the family-we-choose, and I feel like in the context of a blended family, or an adopted family, that this would be a great book to use in a discussion about how kin doesn’t necessarily mean blood-relative.

The story is a gentle subversion of a whole host of fantasy tropes, and as a result, it becomes its own thing entirely.

Have you read The Minstrel and The Dragon Pup? Or any of Sutcliff’s other works? Can you think of any other fantasy stories which avoid the usual stereotypes?

As ever, I’d love to hear your recommendations. 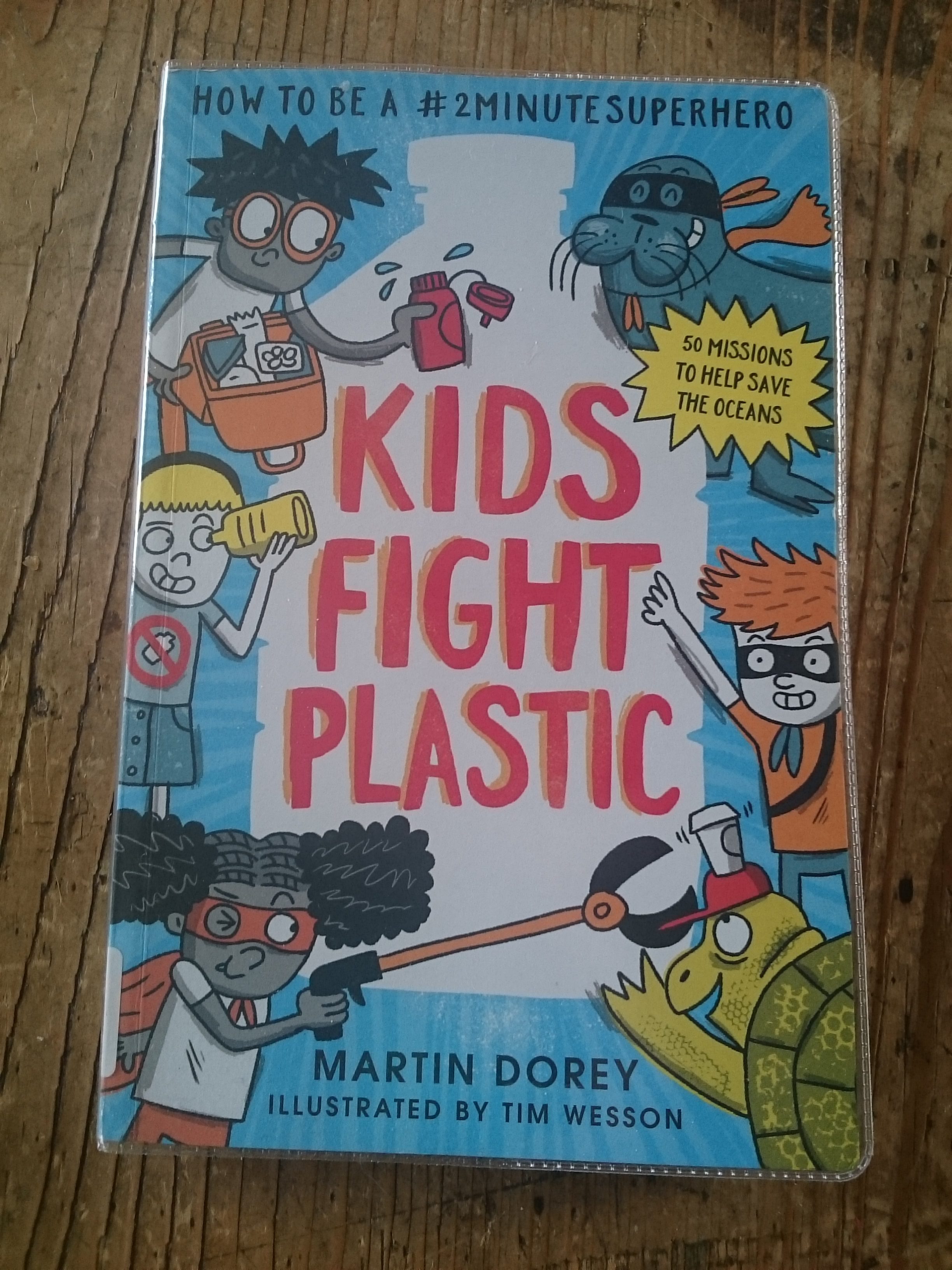 I have seldom seen Daughter as excited by a book as she was when we found Kids Fight Plastic by Martin Dorey at our library. Which is saying something – she gets really excited by books.

Just before the summer holidays started, she took part in a litter-pick and since then has been on a one-child mission to eliminate plastic waste from our home. Now, fully armed with a handbook on how to do that, she’s become a force to be reckoned with.

So, having had this book flashed at me more times than I care to admit to, I thought I would take a closer look.

For the most part, I really like the tone of the book. It’s not anti-all-plastic – there is mention at the beginning of good vs bad (i.e. Lego & medical equiptment = good plastic, single-use straws & clingfilm = bad plastic). I also really like that nothing is dumbed down because it’s written for children. It states in black and white that sea birds are dying because of what we’re throwing away, and whilst that’s a grim fact, it’s not going to change unless we talk about it and let our children make informed choices for themselves.

On the other hand… titles of segments such as ‘Fight Plastic With Pester Power’ made me feel as though the book was targeted at a very… specific demographic. Suggestions of ditching the supermarket in favour of farmers’ markets are well meant, for example, but they’re just not within everyone’s means – whether as a result of financial restraints or the fact that there just aren’t any farmers’ markets in your area.

But that aside – the illustrations are lovely and as I said, the text isn’t in the least bit patronising. And whilst living where we do, there’s no way I could use a milk-man, or visit a weekly farmers’ market (they only run monthly and ours tends to sell hobby crafts rather than produce), I did get some ideas as to how I can further reduce our household waste, particularly in regards to things like stationery.

I think, coupled with a healthy dose of managed expectations, this is a great book to get small people thinking about, and talking about, the waste we’re creating. Hopefully doing so will help them to make wise decisions further down the line.

What are your favourite books about the environment? 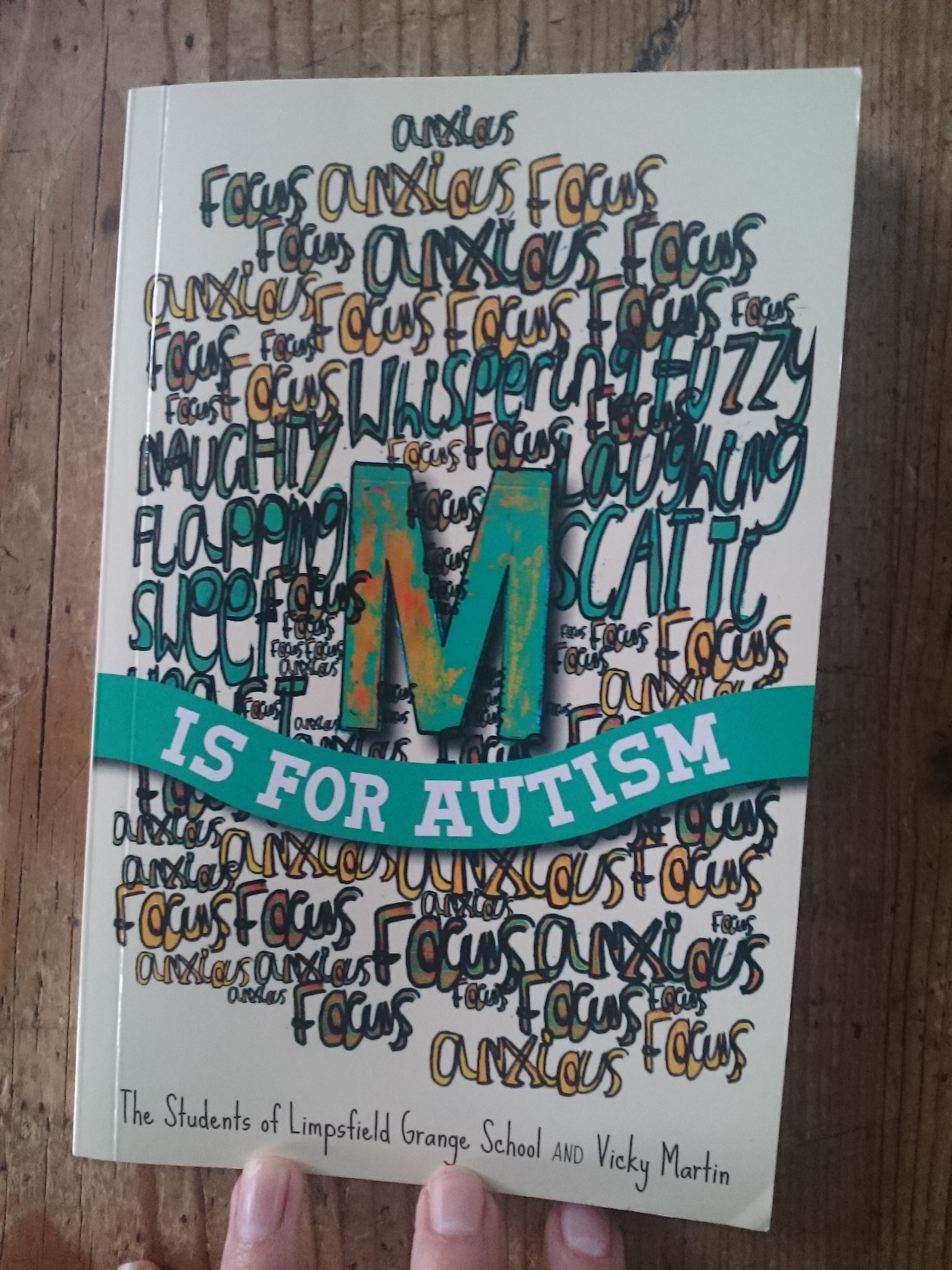 M is for Autism is a book by The Students of Limpsfield Grange School & Vicky Martin.

I definitely think that this is essential reading – not just for children/young teens, but also for their parents. The searing truth with which its written makes it one of the clearest, most concise insights into what life is like as an autistic person that I have read.

There were two sections which really stood out for me as being especially piercingly honest.

The first is from M’s perspective and concerns her feelings following her diagnosis;

It’s like I can be shelved correctly or put in the right section. I mean, do people even know what being autistic is? The truth is they don’t really know me. I wonder if they really knew me they might get scared, so it’s easy for them to say ‘she’s autistic’ and label me but the truth is they have no idea of the shape, texture and size of my world.

The next is from M’s mother’s point of view;

So here I am, chopping onions and trying to bond with my beautiful daughter but it’s not easy. It should be, shouldn’t it? But reaching her and connecting with her feels so hopeless, so futile, but today I am making a big effort. I am her mother and I cannot give up on her or let her down.

The prose is this vital, this direct, throughout the book. So, although it’s a very slim volume which reads really naturally, it actually took me a long time to digest the words properly – I took my time over it, which I think everyone who reads it needs to do.

The artwork is also really honest – bright, block colours and really graphic prints. The art can be quirky and fun whilst simultaneously thought-provoking, generally just suiting the age and feel of the protagonist perfectly.

I feel as though this is one of those books which every home needs – whether autism impacts you directly or not. If everyone read this, there might be a greater degree of understanding and awareness in the world.

Have you read M is for Autism, or another book with a female autistic character?

I really liked Sophy Henn’s book, Pass It On, so when I saw she had written Super Duper You, we checked it out of the library and took it home for a read.

Before I start, talking about the book-proper, I just wanted to say that even though our house seems to be constantly overflowing with books, I don’t often buy them. Generally, we only really use the library, read a story until everyone is tired of it and then take it back, knowing that should we want to read it again we only need to place our order and then go to pick the book up.

Every so often though, we read a book and I want to own  it. Super Duper You is one of those. It’s got shades of ‘Oh! The Places You’ll Go!’ by Dr Seuss to it, but it’s vastly more succinct and I love that it’s accessible to even the smallest of listeners. Again the art-work is modern and bright and pleasing. Again, I feel like my accent works against me with the rhyme.

I think I love the illustrations and the colours of this book most of all – especially the rainbows and the quirky background ‘grafitti’. I wish my big, special camera was more cooperative so I could take better photos for you, but for now you’ll have to make-do with my tablet’s lens and have a look the book for yourself… 😉 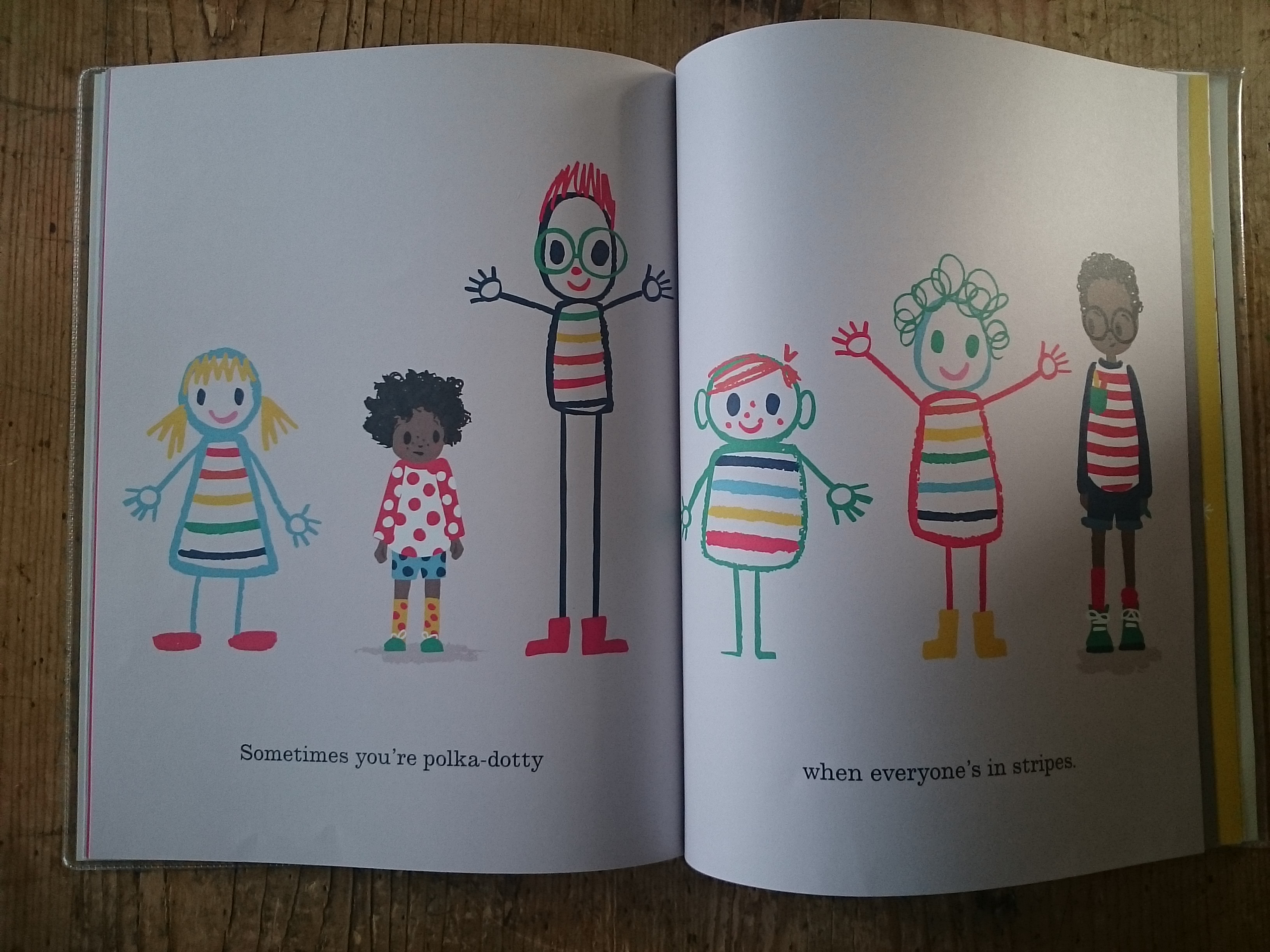 I think the page above is my favourite. It can be used in conjunction with other books to start conversations about the positives of neurodiversity, or about differences in family situations – or about anything, really..

I also really like the fact that it is a love-letter between siblings. There are lots of books which explore the parent/child relationship, but off the top of my head, the only nurturing siblings I can think of are Lauren Child’s Charlie and Lola or The Restless Girls by Jessie Burton. It makes a nice change from the usual ‘my brother smells’ dynamic that seems so prevalent in children’s books.

Have you come across Sophy Henn’s work yet? I’d love to hear what you think.

Dear Ijeawele by Chimamanda Ngozi Adichie is a book that I wish I’d had in my life a long time ago.

Whilst not technically a children’s book, I decided to include this on The Inquisitive Newt for two reasons.

Firstly, because I wish I had read this during my teenage years, when I was stumbling into my initial romantic relationships. I feel that having reasonable expectations, printed in black and white, would have given me permission to advocate for myself and my rights within the ‘partnerships’ more.  I plan to give a copy to Daughter when puberty takes hold.

Secondly,  I included it because I would have loved to read it after having given birth.  I came to a lot of the conclusions myself, but I often felt alone in my convictions regarding feminism and motherhood.  Ironically,  given that I’ve categorised this review as my first ‘parenting’ title,  I especially loved the section regarding the use of ‘parenting’ as a verb.

I really love the tone of the text – that it was adapted from a letter gives it an enormous warmth and immediacy. I’ve read a lot of books about feminism but they can often feel… Academic,  rather than practical.  This one felt like a conversation with a friend, which I suppose it is.

Are there any books you wish you had come across sooner? Are there any you plan to read/gift to your children for this reason?